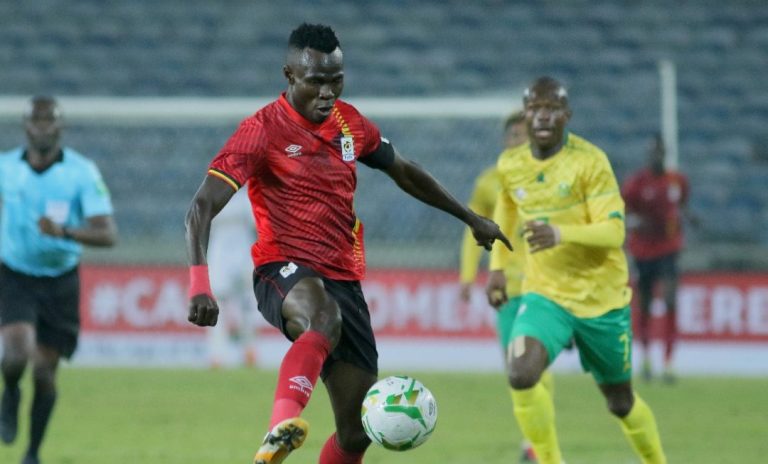 Uganda Cranes captain Emmanuel Okwi believes that his side has plenty of positives to pick from their game against South Africa despite the loss.

The Cranes suffered a 3-2 defeat to South Africa’s Bafana Bafana in an international friendly played on Thursday at the Orlando Stadium in Soweto.

“First of all, I want to thank God that we finished the game without any serious injuries and I believe we have had a reality check against such an opponent,” Okwi told FUFA media after the game.

“We still have a lot more to do before the World Cup qualifiers come around in a few months.”

“But depending on today’s game, there were a lot of positives especially with the young and new players coming into the team and I believe we shall build on that to be ready come September,” he added.

The 28-year old captained Uganda Cranes for the first time since taking over from the retired goalkeeper Dennis Onyango.

Uganda started the better side and broke the deadlock in the 17th minute through Vipers SC winger Ibrahim Orit’s header off Okwi’s cross.

With the Cranes taking the halftime advantage, it was South Africa all over the ground after recess.

Substitute Evidence Makgopa equalized for the Bafana Bafana in the 62nd minute, before Bongokhule Hlongwane gave them the lead for the first time in the game in the 71st minute.

Makgopa stretched South Africa’s lead, scoring his second of the night with eight minutes to play before Abdul Lumala pulled one back for the Cranes in the 89th minute.

The loss ensured that the Cranes remained winless in four attempts against the Bafana Bafana who have defeated them on three occasions now with the other game ending in a draw.